(Produced with the assistance of Allen Badaway.)

Hofner have produced quite a few unique guitar models over the years, but the Shorty is probably the most practical. It is a true "travel guitar", with its simple and rugged construction, its small body size (but not small sound!) and compact overall length. Remarkable, the Shorty manages to retain a 24�" scale length - the same as a Gibson Les Paul.

The Hofner Shorty first appeared in 1982, and production lasted for about four years. These guitars were hand-made in Hofner's factory at Bubenreuth, Germany, using high quality German hardware and electrical components, generally from the Schaller company, although some units used Shadow pickups. Since 2005, Hofner have been producing the Shorty again, but this time from their facility in China and aimed at the "budget" market.

The Shorty concept was well developed, with four versions being offered during the 1982-86 period.:

As well as the rather conservative natural mahogany finish, cute solid colour options of red, yellow, white, and blue were also offered, which were more in keeping with the un-conventional nature of the guitar. There do also seem to be some black Shortys out there. 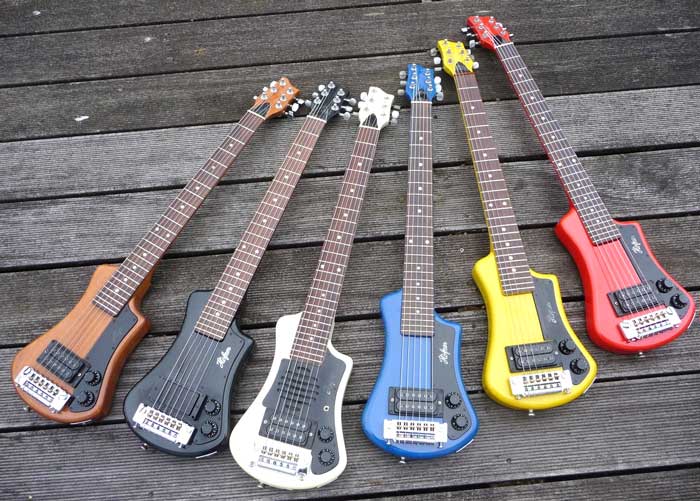 A collection of mid-1980's Shorty guitars, showing each of the the various finish options. (Courtesy of Wolfgang in Germany)

The standard Shorty model, with full-size 24�" Scale Length and 24 Frets !! As stated above, either a Schaller or a Shadow pickup was fitted. The body and neck were made from mahogany, and the fingerboard was rosewood.

This version was the same as the standard 180 model, but it was fitted with a battery-powered amplifier inside the body feeding a small speaker built into the scratchplate under the strings. The catalogue stated that the guitar was equipped with a 1 Watt power amp drawing 5mA standby current on a 9V battery. An output jack was also provided in order that the guitar could use a conventional external amplifier.

The bass version had a short 28" scale length with 24 frets. It was fitted with a Schaller solid brass bridge/tailpiece, which allowed for the strings to pass through the body, unlike the 180 and 181 models. Otherwise, the concept and design of the guitar was the same as the conventional 6-string Shortys.

During the 1980's Hofner were offering kits of parts which allowed the purchaser to assemble and finish his own instrument. The available kits were for two models of classical guitar, the three Shorty models, and three models of violin! To allow the purchaser to achieve a perfect finish on the completed instrument, Hofner also offered very comprehensive "Varnish Sets" which included sandpaper, brush, pore-filler, and even an application sponge.

It would appear from the 1985 Hofner Price List that the kits did not provide any major financial saving to the prospective purchaser though. The Shorty Model 180 Kit was priced at 434DM with the Varnish Set being 150DM, giving an overall outlay of 584DM. A complete Shorty 180 in the Price List was 592DM; hence a difference of only 8DM !!! However, the Hofner catalogue entry does specifically state that the intention of the kits was to allow the user to "make your Shorty the colour you want". So perhaps it wasn't specifically a cost saving measure?

B: THE 2005 ONWARDS CHINESE PRODUCTION PERIOD

At present, only a standard 6-string version of the Hofner Shorty is being produced. Appearance-wise, it is very similar looking to the 1980's Hofner 180 as can be seen from the comparison photos below, although there are some prototypes that are in circulation which are fitted with a separate tailpiece and bridge rather than the combined unit on the production version.

A full evaluation of the current Shorty model is provided ELSEWHERE on this website.

US Distributer for Hofner, Multivox's Advert for the Shorty in the 1980's.

This Fact-File has been produced with the assistance of Allen Badaway of the USA, who is an authorative collector of Shorty guitars and basses. Most of the photos above are of Al's guitars. To see Al's Shorty Collection, click HERE.