Hofner's use of active electronics as an option on their guitars seems to have occurred in four main phases:


Hofner were one of the very first manufacturers to offer active circuits in their guitars. They were basically introduced for players who did not use a conventional guitar amplifier, but who could plug into a domestic radio set or radiogram. The idea was that the active circuit would boost the signal to the radio receiver, hence increasing volume and improving the tone. As the Hofner catalogue stated: "Our new electrc guitars with built-in audio-frequency pre-amplifier can be connected with any radio without a special amplifying set and will still attain a superb tone quality never effected up till now. Therefore it is not necessary anymore to purchase an expensive amplifier. " The circuit was powered by a 1.5 volt torch battery which was fitted into a special compartment, usually adjacent to the strap button at the bottom of the body in the guitar's side. This was covered by a nickel plated swivel cap. A three way chicken-head control was fitted to the body top which allowed the following functions:

The model number of the particular guitar was given a "T" designation to indicate that it was a "transistor powered" instrument. i.e. a conventional 457/S/E2 archtop with normal passive electrics and two pickups would be designated as a 457/S/T2 if the optional active circuit was fitted. A single pickup active 457 guitar would be a 457/S/T1 and with three pickups - 457/S/T3.

If Type 511 "staple" pickups were fitted, the model designation would be 457/S/T20, although by that late stage very few active circuits were being fitted.

The pre-amp option does not seem to have been offered on those guitars supplied to the Selmer Company.

EXAMPLES OF ACTIVE HOFNER GUITARS FROM THIS PERIOD:

In 1960 Hofner offered an addition to the onboard pre-amp, in the form of a tremolo circuit. A three-way selector switch acted both as an on/off switch and tremelo speed control, and this was supplemented by an adjacent rotary pot on the body top which controlled tremolo intensity, A single selector switch turned the effect on and off without effecting the pre-set settings. This option was available for only two years or so. Hence, guitars so equipped are very rare.

Such guitars were given a "V" designation.

The above photo shows a 1960 Hofner 470/S/E2V, owned by Dieter Serowy and fitted with the electronic tremolo circuit described above. The chicn-head rotary knob controls the tremolo speed as well as being an on-off switch. The other rotary knob with the "tea-cup" head controls the tremolo depth/intensity. The switch to the right of the conventional control console turns the tremolo effect on and off. Further details and photos of this 470/S/E2V can be found HERE.

During this period, Hofner also offered a passive stereo circuit option for their archtop and semi-acoustic guitars. This is most often seen fitted to the Selmer-distributed Hofner Verithin Stereo between 1963 and 1965. To see an example of such a guitar, click HERE.

For a short period in 1960, Hofner experimented with two battery-operated guitars fitted with a built-in amplifier and loudspeaker. This equipment was fitted to the 126 "Club" model (Hofner 1260) and a totally new (and totally wierd!) guitar designed called the Fledermausguitarre, also known as the Hofner Bat Guitar. These guitars, particularly the Bat Guitar, were made in very small numbers and hence can really be considered to be only prototypes and /or exhibition guitars. 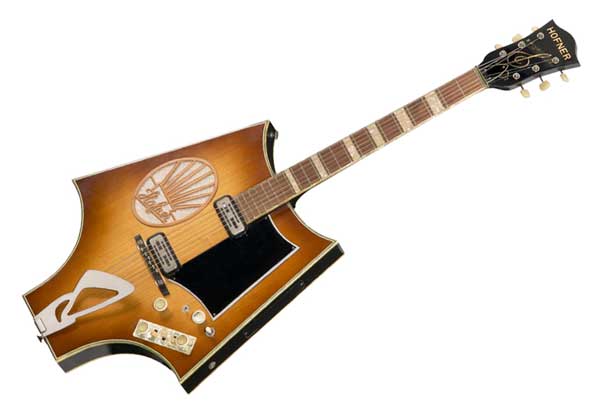 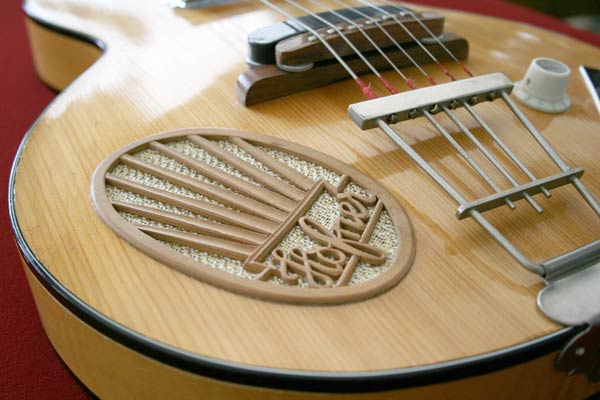 
Following on from their earlier forays into active guitar circuitry as described above, Hofner consolidated their previous efforts at active circuitry into the production of dedicated control consoles with all active circuits built in. This resulted in the offering of more effects options and getting rid of the dis-jointed knobs and switches, and hence improved the appearance of the active guitars body tops. In addition, the battery holder location was changed from the bottom edge of the body to the rear of the body. It all gave the impression that Hofner were now serious about their active electronics, and certain models, both conventional 6-string and bass, were marketed strongly as active models.

It would seem that Hofner initially set about the task by using a console format which was very similar to the old E1 and  E2 rectangular consoles - i.e. rectangular is shape and with pearloid facings. (See the treble boost photo below.) However, possibly due to the requirement for having more effects on a guitar than a small console could contain, large semi-circular consoles were soon developed, which fitted snugly into the lower bout curve of the guitar or bass.  The various effects offered either singly or in combination are listed below, together with the designation letter that Hofner gave them:

In addition, those guitars also fitted with a Vibrato Tailpiece also were given a "V" designation.

Examples of various active control panels used during this period are provided below:

Sound Mix (M) with slide-switches for two pickups on guitars and basses.


EXAMPLES OF ACTIVE HOFNER GUITARS FROM THIS PERIOD:

Hofner still continued its tradition of offering the guitarist guitars with active circuitry during the 1980's, but the emphasis was back on the boosting of signal and tone-gain, rather than on specialised effects such as tremolo, fuzz, and wah. Many of the Hofner "S" series solid guitar models and "T" series semis had active circuits as standard, and not just as an option. Examples of these can be found at:

An echo from the early 1960's did however appear, in the form of the Hofner "Shorty Super" Model 181 which appeared in 1982 with an in-built amplifier and loudspeaker. The concept of the Shorty travel guitar fitted in well with not having to carry a seperate combo amp around !

The dynamic new range of Hofner solids and semi's that were introduced in the late 1980's brought many inovations to the old brand. However, the use of active electrics was by then on its way out. The following is an example of the much fewer Hofner guitars fitted with active electrics from this period:

There are now no guitars or basses with active electronics in the current Hofner range.